Skip to content
By David WestCategories: The Father's Ink Well 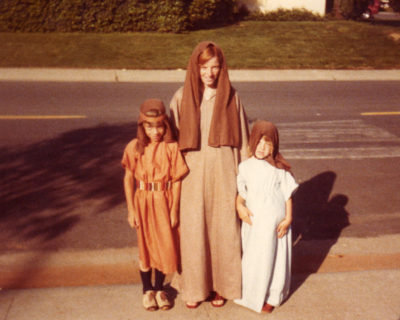 perform in a musical. They were dressed as if they were living in first century Bethlehem. The story was fictional but was set within the larger story of Mary and Joseph and the birth of Jesus. I enjoyed watching my kids sing and act, and they enjoyed performing.

Normally I’m not a big fan of musicals, but I’m a big fan of my children and love to watch them perform. As I watched them the other night, I was particularly moved to joy. I wondered why? What was it about watching them sing and act while dressed in Bible costumes which resonated inside me?

My middle name is David (I’ve always been known by my middle name) and my friend in school had the middle name Jonathan. Guess what story we acted out one year? That’s right – the story of Jonathan and David. My friend pretended to shoot arrows and I pretended to be hidden behind some rocks. We were friends in real life playing the role of two friends found in Scripture.

Another year I went to school dressed like Aaron the high priest. My mom was creative that year and my costume won a prize. I wore a tunic to school that day but I wasn’t embarrassed; we were all doing it. Our principal was tall and acted out the role of Zacchaeus one year. We had Sycamore trees lining an area of grass at the school and he climbed up into one of them. I don’t recall what he did once he was in the tree, but it was all great fun.

It was more than just fun, it was reinforcement. Acting out Bible stories, dressing in priestly garb, and watching my school principal up in a tree, kept the Bible stories at the front and center of my life. At school, home, and church there was a cohesive narrative, a unity. I was being taught that Bible stories weren’t for church only. The stories were also reinforced at home and at school. Scripture was talked about constantly when I was young and this was helpful for me.

I want the same for my children. I want them to know God and His Word. I want them constantly surrounded by Scripture. Whether at the dinner table, during the school day at home, in choir, and, of course, at church.

All this was going through my mind as I sat watching my children sing and act. I enjoyed the show, but also, and even more so, I appreciated the reinforcement. Bible stories are becoming a part of the fabric of their lives. They are learning them in various ways and from various people.

While watching them perform the other night in Bible costume, God opened my eyes and allowed me to see Him at work. He has allowed me to live in a place where my children are surrounded by Biblical themes. The things I’m teaching them at home are being reinforced in many places and in various ways. Because of this I am eternally grateful.