Skip to content
By David WestCategories: The Father's Ink Well

As I arrived home from work, my wife said to me, “Calvin has a writing project he needs help with.”

To write is to die a slow painful death. At least, my son thinks so. He would rather do almost anything else. To read the text and fill in the answer blanks is no problem; that isn’t writing. Writing paragraphs, or even sentences, requires a different kind of work for him. It requires creativity and answers that aren’t in the Score Key. I don’t blame my son, many people don’t like to write. It’s an important skill, but it doesn’t come naturally. It must be taught.

The other night I was given the opportunity to help my son learn to write. He had been learning about various careers  in his Social Studies text and needed to write about how a person in one of those careers influenced him. He was stumped. 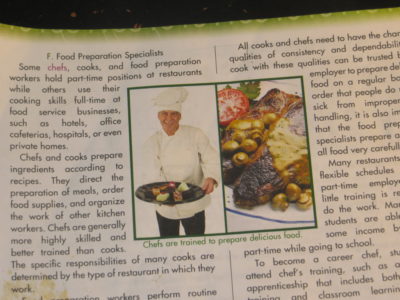 Days earlier I had suggested a tweak. “Instead of writing about how you have been influenced by someone, you can write about how you would influence others if you were in one of those careers.” He decided to write about being a chef. Here is his essay in full and the reason my wife said he needed help:

A chef can cook meals for sick people.

That was it; a one sentence essay. I had to admire his ability to get to the point, to cut out unnecessary words, to be clear and concise. I also recognized an opportunity to teach him a few things. We talked for a minute about the assignment and I made suggestions. He asked if five sentences would be sufficient. 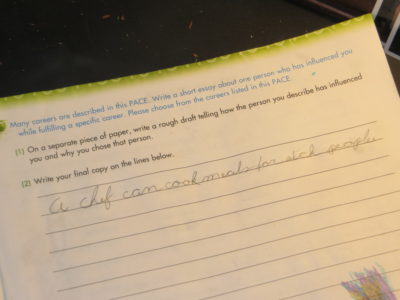 He just stared at me, maybe listening, but probably wondering how painful this lecture was going to be.

“Don’t ask how little you can do and still complete the project. Take time and put in the effort to do the job well.”

Former experience with him told me I would need to do more than lecture. He really didn’t know what to write, or how to write it. The dilemma for me was to decide how much I could help. This was his project, not mine. It didn’t take long to decide. The project wasn’t as important as the process. I would use this opportunity to model for him. I would develop an outline, then write a rough draft, and have him copy my work. Observation is a learning tool; my son would learn by watching me.

I turned in his PACE to the section about chefs and started reading aloud. From the text I developed a list of bullet points that formed a loose outline. I wanted to keep it simple, so I didn’t develop the outline into proper form. I took a blank sheet of binder paper and handed one to my son.

“Now, I’m going to write from this outline and I want you to copy me. First, we need an introduction.”

I explained introductions and how they function, then we started writing.

“Write this sentence,” I said. “Chefs do their work in a variety of places. They work in restaurants, cafeterias, and homes.”

We continued on. The process from beginning to end was almost two hours. After he wrote the final draft neatly, I gave him a hug.

“Calvin, if I didn’t care about you, I would let that one sentence essay fly. But I care too much about you to do that. I want you to be a person who knows how to write and communicate effectively. It’s an important skill for life. This one session isn’t enough to teach you everything about writing. It’s only one lesson of many. You will be stuck again and again with writing and you will struggle. When you do, I will help. Eventually you will know how to write an essay from start to finish on your own.”

I tried to keep an encouraging tone throughout. He was frustrated enough; he didn’t need me frustrated as well.  I could have been upset that my evening was spent writing an essay about chefs. It would have been easy to be grumpy and complain that I had better things to do. The truth, of course, is that I didn’t have better things to do. What could be better than two hours teaching my son important lessons for life?

I teased him today, “Maybe you’ll grow up to be a writer.”

He gave me a look I could write about.