Sunday morning, I read the book of Esther before going to church. I looked at what was next on my reading plan, and opened my Bible. Esther was only ten chapters so I read the entire thing before getting ready to leave for church.

That morning, unknown to me ahead of time, the teaching was from the book of Esther. God is never mentioned by name in the book, but He is there throughout the story.

Esther was written for a Jewish audience and those to whom is was written would have seen the hand of God behind the curtains of circumstances without being explicitly told. The Jews are a people who had served God, then forgotten God, served God, then forgotten God. Or better, rejected God and served other gods. But their history and culture, even when Esther was written, was of a people who had been given promises from God and had seen God work. They knew of the God who controls circumstances and keeps promises: the story of Esther was one more evidence of His sovereignty.

The story of Esther served the Jews in antiquity and can serve us still today. As I read through the story in one sitting it was obvious to me that God was at work. The story is amazing. I can’t go through it all, and I’m assuming you already know the story. If you don’t, then you need to read it. 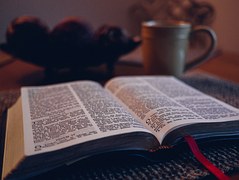 Haman wishes the Jews to be annihilated. But because Esther is queen she is in a position to stop this plot and save the Jews.

Here are a few highlights to show God controlling circumstances:

Each detail is a link in the chain which finally binds the reader to the fact that God controls circumstances.

God is still in control of circumstances today. I told my wife recently as she was headed into surgery to remember the story of Esther and that every little detail was in the hands of God.

God controls circumstances and keeps promises. In the end, the Jews were not exterminated, and they continued to flourish. Their history wasn’t all roses from that point on but God preserved them because He had promised to bring a Messiah to the world through them.

God had promises to keep and He will keep them. He is able to move on King’s sleep patterns, control what histories are read, control the timing of a man walking in to visit the king, and on and on.

What promises has he given to you? Be encouraged – He is still in the business of keeping His promises!